I will not market a product that I have not used myself. I am very serious about that – if I don’t believe in it, why should I try to talk you into buying it? So, that said, here is my review of the Contender pad.

I spent one playday switching between Leonidas (Primoris Prognatus) with a Contender pad and Tier (Tiers of Lords) with a Zone pad. I love the Zone pads – seriously, I am not knocking them, I own four – but the Contender pad blew me out of the water.

The Contender is a joint venture between ThinLine and Back On Track. I do not own a trailer load of BOT, like just about every other barrel racer I know, in fact, this pad is my first BOT product.

So what has me sold on it?

Leonidas has an issue when we run with the hair on his shoulders looking carpet burned. The pad I have had the most success with (until now) was the Zone pad. (Before anyone screams saddle fit, my Custom Ryon saddle fits him like a glove.) I’ve never had white spots, but when those curled hairs show up, he’s a little touchy and pissy about it – I don’t blame him either. With the Contender pad I saw three things that sold me on it:

First off, my saddle fit better with the Contender under it that it has with anything else. There is zero obstruction to saddle fit from this pad. My seat felt much like my close-contact hunt saddle, which I really like. 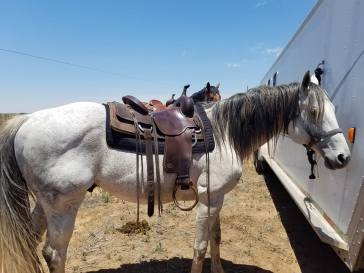 Second, in going back and forth between the two horses with two different pads, I noted considerably less saddle movement on Leonidas than on Tier. They are similarly built, the saddles are as close to identical as two hand-made saddles by the same saddle maker can be, both saddles fit both horses well, and both were cinched with ThinLine girths. A marked difference being that Tier is not quite running and turning as hard as Leonidas, so I expect less saddle movement on him. Except, comparing the two, I had more sway with Tier, without the ThinLine pad, than I had with Leonidas.

Third, and most telling, after some pretty stunning runs from both boys, when I pulled the saddle off of Leonidas I saw with 100% certainty that I would be riding that Contender pad from now on. He had zero burned hair, no dry spots, and no tender spots.

So, I’m sold on them. I also like the option of being able to shim the pad for minor differences in fit, as well as it being machine washable.